Introduction
Mike and Kathy Smyth were first introduced to Trevor Goacher the CEO of Care Ashore and Bill Hicks the Estates Manager over a cup of coffee in the library of Sachel Court.  They were neighbours as Mike and Kathy had purchased just under 40 acres of unmanaged woodland on the borders of the Springbok Estate.  Kathy knew that the area was off the gas grid so she asked what Care Ashore used for heating and it transpired that they had old oil boilers which were in need or replacement. They wanted to switch to biomass but couldn’t afford the capital cost which had been estimated as in the region of £250,000.  Mike suggested the community model as an approach and Care Ashore liked the idea.   The next 18 months or so were spent working up the proposal and fleshing out the structure.  Planning for the boiler house was submitted in April 2014.

Kathy started writing the blog in July when planning permission was granted and we became more confident that the scheme could actually go ahead.

14 July 2014
It’s been an interesting and important few weeks for the Springbok project culminating in the grant of Planning Permission by Waverley Borough Council for the new boiler house and underground fuel silo.  Thanks to Douch Biomass for their help with this and particularly to James Barnett of Douch.

Tom Parker has come “on board” and agreed to become a Director of the Springbok co-op.  Tom is responsible for a non-domestic wood biomass boiler on a large estate not far from Springbok.  He is also passionate about butterflies – here is an extract from an email he sent me after a recent visit to the Forestry Commission woods near Springbok Estate which are well managed which helps create ideal habitat for woodland butterflies.

“I went on to Sidney Wood after I left you and it is fantastic for woodland butterflies. It was full of Silver Washed Fritillaries , White Admirals , Small and Large Skippers and many more.   All were flying on the edge on your woodland along the path from Sidney Wood. I also spotted a Marbled White (never seen in a woodland setting before) and the walk was made perfect with a single Purple Emperor on the ground.” 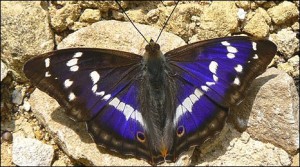 Along with Stewart Boyle, our multi-talented biomass consultant who also has a media business, we have also started work on a film on the project as we thought it would be good to have a record.   I spent an interesting day last week at Springbok with professional cameraman David Vickers  doing some ‘before’ filming of the existing boilers and the location of the boiler house.  We also interviewed a couple of the Care Ashore residents including their oldest resident Noel now 94 and his wife Jean.  Noel entered the Navy in 1935 at the age of 15 and a quarter (he was very precise about the quarter) and served on the Atlantic Convoys during WW2.  Thanks to David and Stewart for doing this for us.

On the practical side, an energy audit has been carried out of the main house by John Hubbard (who may be familiar to some of you through Energy Alton but is also a qualified Green Deal Assessor) to see what energy savings measures the co-op can install as we aren’t going into this project just to create a lot of hot air – energy efficiency is also vitally important to the Springbok Co-op Board and we want to do all we can to help Care Ashore save both energy and money.

2 September  2014
Last week the Department of Energy and Climate Change announced a reduction in the RHI rate from 1 October for non-domestic RHI.  Tier 1 will drop from 8.4p to 7.6p and Tier 2 from 2.2p to 2p – i.e. a 10% reduction.  They invited comments, so I sent one.  I pointed out that announcing on 29 August the rate of the RHI as from 1 October is insufficient notice of these changes, particularly for community groups and that we needed pre-accreditation similar to the system community groups have under FITS which allows you to apply for the rate applying at the stage at which you get planning permission.

This is the response I got  today

Thank you for your email. We understand the difficulties that can sometimes be encountered as a result of a reduction to tariffs, (no, you clearly don’t) and your concerns have been noted by the team.  However as the RHI is funded by taxpayers and there is a set annual budget it is essential that we have a mechanism in place to control spend.

Degression was introduced into the RHI scheme in April 2013 and is now considered to be an established and understood method of managing the RHI budget set out in regulations.  We publish forecasts on a monthly basis, between the scheduled quarterly announcements, in order to give the market the best possible idea of what might happen in the future.  This should ensure that interested parties receive a fair and reasonable amount of notice before any reductions to tariffs are triggered.

For further information, monthly and quarterly forecasts are published on our website,  along with detailed guidance on the operation of the degression mechanism within the scheme.

I don’t mean to be rude , but every time I read this the word ‘fatuous‘ springs to mind.   How anybody can think that 4 weeks notice  is “fair and reasonable” when the margins are so tight completely escapes me.   We have a predicted 5 month build, and that means there could be another degression on 1 January 2015, and if things don’t go according to plan yet another on 1 April 2015.  Clearly the person who wrote this has never run a business. Anyway, restraining myself somewhat, and avoiding the ‘fat’ word in my reply, I have responded as follows……………….

Thank you for taking the time to respond.

By way of reply I’d would say that pre-accreditation is an “established and understood method” of securing community enterprise participation in renewable energy.  As for the budget, according to the figures I’ve seen, while the number of 199kW boilers may have exceeded your expectations the number of installations of larger boilers is woefully short so from what I can gather there is no danger of the RHI budget being exceeded.

Finally, in relation to the notice, it is simply inadequate for this sort of project.  We did our business models over a year ago and then sought tenders and then submitted a planning application.  This was before any RHI degression.  It was pointless spending time working on the contractual aspects ahead of obtaining planning. We only got planning permission in July, we have spent two months working on 4 contracts and a share offer.  Still we don’t have final figures for the rate of the RHI for our members because we don’t know what the January degression is going to be, all we know is the range.

While I still expect the project to proceed, due to the capital cost of these installations (which is not of course dropping in line with the RHI) the financial impact  is going to have to be borne in the main by the charitable organisation where we are installing the district heating system – an off-gas grid residential housing and sheltered home complex for retired naval, merchant and fishing fleet sailors.

While I still expect the project to proceed, due to the capital cost of these installations (which is not of course dropping in line with the RHI) the financial impact  is going to have to be borne in the main by the charitable organisation where we are installing the district heating system – an off-gas grid residential housing and sheltered home complex for retired naval, merchant and fishing fleet sailors.

In the circumstances I would have thought DECC could easily have extended pre-accreditation to the handful of community groups attempting renewable heat.  That is all we are asking for.”

3 October 2014
Mike and I went over to Nutley to work out the final details on the contract for the construction of the district heating system and then sign it and pay the first instalment. Makes it sound quick and easy, but Martin Steele the contracts manager at Douch and I have been plugging away steadily at this bespoke, design and build turnkey contract for some weeks.  The devil is in the detail. Thanks to all at Douch. 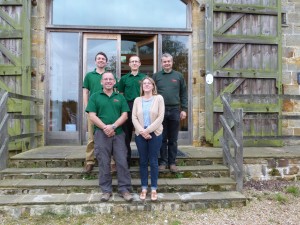 The team from Douch Biomass

5 November 2014
Silence on a blog can mean one of two things. Either nothing is happening, or so much is happening the blogger hasn’t found the time to update the blog.  In my case it’s the latter.

The pressure is now really on because starting on 1 July 2014 the rates paid under the non-domestic Renewable Heat Incentive are being reduced every 3 months and consequently they dropped again on 1 October.  We haven’t exactly been idle as since July 2014 we have negotiated and signed contracts with Douch Biomass and paid a deposit for the groundworks. Our build is predicted to last  5 months so we can’t do anything about the expected degression on 1 January 2015 and Mike will just have to find a way to absorb it in the model.  To avoid any further impact we really need to get the system commissioned before any degression on 1 April 2015 so we paid a deposit to Douch of about £87k to book a start date for the groundworks team when we signed the contract in October.  This was made possible ahead of the share offer by a short term loan from Care Ashore to the Co-operative.

All being well groundworks and the construction of the boiler house will be completed before Christmas, and the boiler installation will start early in 2015.

The boiler house and fuel silo will be almost identical to one Douch have installed at Hever Golf Club which Mike and I went over to see a few weeks ago.

And last but not least, the SEIS Share Offer is about to launch!  So must press on.

14 November 2014
We launched the pioneer share offer today as there is some concern that tax relief could be withdrawn in the Autumn Statement in early December.  We have signed Heads of Terms with Care Ashore although we haven’t yet completed the lease of the boiler house site, but it is nearly there and we are confident in our relationship with Care Ashore.  However the money is needed because to date we are operating on loans not only from Care Ashore but also some of the Directors who had to lend the money for the boiler deposit to ensure delivery in Feburary 2015. They will forfeit any tax relief on any investment they make as a result, but the show had to go on.

20 November 2014
The groundworks team from Reeds led by Craig (in the cab) is now on site.  So far so good. 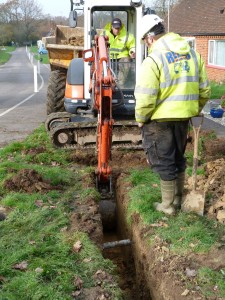 It pays to be careful – and Craig is!

1 December 2014
I completed the 21 year lease of the boiler site today.   No pictures with this post as leases aren’t very photogenic. Thanks to Jonathan Thompson of Charles Russell (acting for Care Ashore) for his assistance and co-operation in concluding this.

13 December 2014
Co-op Directors get an invite to the Care Ashore Christmas Party. 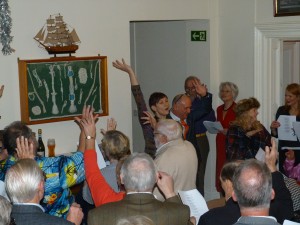 The Reverend Wendy leading The Twelve Days of Christmas – with actions.
Care Ashore CEO Trevor Goacher is to her left.

Mike has a streaming cold and is sorry to miss it – particularly the carol singing led by the Revered Wendy Dalrymple of Alfold Parish –  but Tom Parker and I go and have a good time.  The party food is up to its usual very high standard – another thing Mike was sorry to miss…………