2016 – Getting to grips with running a district heating system and soggy chips.

All entries by Kathy Smyth

Nearly 3 months since the last entry – how time flies. So a quick recap of the last few months.

A technical fault in one of the boilers which was causing it to cut out overnight was resolved when the fan causing it did the decent thing and failed altogether during its warranty period. This was replaced by Herz (so at no cost to the co-op).

As the biomass systems have now been up and running for about 9 months we are starting to analyse the efficiency of the boilers and the system overall as we now have enough data to be able to do this.

The proposed barn site has now been cleared and we are endeavouring to get quotes from barn suppliers although of the three or four approached only the one in Scotland has been sufficiently organised and efficient to actually provide a quote.  Getting them from the others including local suppliers is a bit like getting blood out of a stone!

Heat mains and heat losses ……the story so far

We now have an aerial view with the design and location of the system superimposed upon it.  This helps to explain the layout and how the supply of heat to the estate is divided between the two boilers. 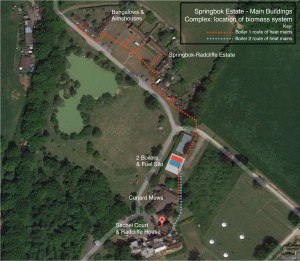 There are heat meters in the boiler house for each of the two boilers and then more heat meters at the point where the heat enters the residential building which that particular main or section of main serves.  Due to the number of buildings and residents there are around 20 of these “point of entry” meters.  There are also meters to record the use of oil if the system has to switch over to oil or oil is needed to backup up the biomass during a cold snap (which doesn’t appear to have happened so far).  Every meter is read at the start of every month.    The RHI is only paid on the heat reaching the second set of meters so it necessarily follows that the co-op bears the cost of the heat losses in the boiler house and heat main.

I thought it was about time I gave some information on the Springbok system’s performance to date.  Obviously we anticipated a percentage of heat loss from the heat main between the metered output at the boilers and the metered heat received at the RHI meters where they enter the buildings and between the two boilers we have a fraction under half a kilometre of heat main.   We have now built up sufficient data to be able to start to analyse the heat losses between the boilers and this second set of meters.

The loss in Boiler South (Sachel Court) ran at just over 9% from 1st October 2015 to March 2016 and the loss in Boiler North (the bungalows, maisonettes and Cunard Mews) ran at about 19% in the same period – i.e. only 81% of the metered heat from Boiler North is received at the RHI meters.  This is the case even though Douch Biomass used the best insulated heat main on the market – the pipes carrying the water there and back are surrounded by a thick wall of insulation which to me looks remarkably like celotex (there is a picture of a cross-section of heat main in the February 2015 post).

We have always anticipated higher heat losses from Boiler North since the heat main is longer and its use less intense.  In an initial discussion about the losses Nick Douch commented that he thought that from his experience the boiler house losses would be 4-5%.  This suggests the remaining heat loss is from the heat main – 5% to Sachel Court and 15% to the bungalows and Cunard Mews.  Although the losses from the Boiler North main seem rather high to us, Nick says they are about what he would have expected given the number of different users and the lengths involved.  Also these figures were calculated before we had started to receive any real benefit from some efficiency works which were carried out at in February to reduce demand from one “permanently on” heating loop where there was a pretty well constant call for hot water to one of the groups of bungalows.   We think we have already detected an improvement in the March meter readings and we are hoping that these savings will be more evident in the summer months. We will also be trying to co-ordinate the timers on the various hot water cylinders this summer to try to unify the calls for hot water to the hot water tanks as this should also help to reduce losses without affecting the residents.

Oil was projected to supply 5% of the heat but in fact since commencement oil has provided just over 3% of heat supplied. The use of oil has been less than in our original plan, presumably because during this period there was no lengthy period of intense cold weather so demand was within the capability of the biomass boiler.  This has modestly improved financial performance.  The main use of the backup oil has been during breakdowns of the biomass system – see the previous blog entry for 23 March.

No, I hadn’t forgotten I was supposed to be writing a blog. Quite the opposite but I wanted to wait until a few things had become clearer and a few issues resolved rather than subjecting you to a blow by blow account.

First off though, it’s been a terrible summer for butterflies – worst ever according to Butterfly Conservation.  That was my experience and also that of fellow director and butterfly enthusiast Tom Parker.  It has also been confirmed we have Chalara (Ash dieback)  in the local ash.  There is nothing we can do about this and we just have to wait and see how it develops and if we get any resistant trees.

My main memory from the Co-op this summer is going to be dealing with the issues with the quality of the chip supply.   In the spring Douch (our contractors) expressed concern at the level of contaminants in the ash as they sifted out both small stones and some metal.  This is not good either for the augers or the boilers which are still under warranty.  We took this up with South East Wood Fuels who decided the problem was caused by stones which had become stuck to the bark in the wet spring while the whole timber was being moved on chalky soil on the South Downs which was the then source of the chip.  SEWF switched our supply to a source of chestnut which was initially satisfactory but then different problems started to arise.  We had one rotten load –  light and crumbly so low calorific value – and then two wet loads. You know when its wet, it is slow to slide out of the tipper and when in the boilers it produces quite smelly smoke whereas normally it is papal white and you can see and smell virtually nothing. So we had samples of chip professionally tested by a company called Wood Fuel Testing in Clitheroe and it was indeed wet.  On behalf of the Co-op I expressed my displeasure to SEWF who responded swiftly and very professionally and has now switched us to a dedicated supply of chestnut from the Cowdray Estate in West Sussex (aka ‘posh chip’) which to date has been consistent and very satisfactory.  Douch are also much happier with what they have seen during the routine servicing.